I took an entire semester on structural equation modeling (SEM), and I still only have a rather fuzzy idea of what it is. In short, this is the best technical definition I’ve arrived at.

A Brief Technical Definition of SEM

That may make some semblance of sense if you’re familiar with statistics and psychometrics, the field of using surveys to measure educational and psychological abilities. So what is SEM to normal, decent, God-fearing people?

A Conceptual Definition of SEM

Structural equation modeling is a loosly defined quantitative method of building and then testing a mechanistic model. If a researcher understands a concept, they can then propose a model, where one step affects another, which may then inhibit a third step, and so on. Once a model of sequential steps is described, it can be tested against similar models by various statistical methods. The inferior mechanistic model is discarded in an iteraive process as the researcher strives ever nearer to the truth.

Honestly I don’t think the above description is elegant enough to explain SEM to my grandmother. But it should be enough to communicate with other students and researchers.

Okay, don’t lose me here. Just relax and kind of let your eyes out of focus. Don’t look at the details. 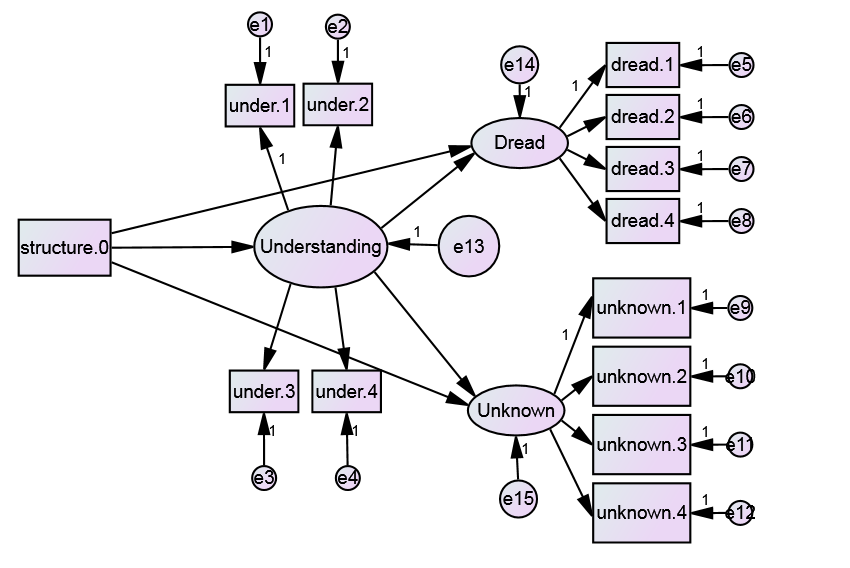 This is a google image of an SEM diagram. I’ve no idea what it’s trying to explain. And that’s kind of the fun of SEM. You look really smart, but you’ll probably have a rough time explaining your theoretical mechanism to anyone.

These are mechanisms, and they look like spiderwebs of circles and rectangles with arrows going everywhere. There’s a technical language to the SEM model diagrams that you can learn from some of the links at the bottom. But for now, just know how to spot an SEM model diagram in the wild.

An Application of SEM: Survey Data

SEM is a method that has a couple really great applications and many terrible ones. It’s great if you have a data set that is on the order of magnitude of 100 to 1,000 observations. The variables in the model should also be continuous, as dichotomous and integer variables lead to mathematical problems. For this reason, SEM is more common in psychology and the humanities rather than medicine or epidemiology…at least for now. In particular, SEM tends to be applied to survey data.

Survey data takes a bunch of items, adds them up in some fashion, and produces a continuous score. We all know this from elementary school, where if you got 79% on a quiz and your friend got 80%, then she was smarter than you and that was that.

While this might serve some purpose in school, it’s not great when assessing whether a psychiatric patient is competent to make decisions with their physician on managing their chronic kidney disease. So instead we ask the patient a series of multiple-choice questions, score it according to a research-validated method, and then use clinical expertise and guidelines to decide if the patient really is capable of refusing medical advice. SEM may have been used by the team of researchers who validated that survey, which is now used by the psychiatrist in the emergency room…in a utopian, ideal world at least.

In the real world, clinical data is often not continuous, and SEM doesn’t have a great fit. Genetics research may already have a few good applications. But many fields do not. Hopefully, the potential uses of SEM are broadening as we get better at measuring every possible variable with greater and greater precision.

Imagine a world where we know exactly when the last dose of insulin was given for an entire population of diabetics. Then we could use the variable “minutes since last insulin dose was given”, instead of saying “a couple of hours ago” or “yesterday”. This information may be a useful intermediate step in an SEM model that attempts to characterize how processed food and alcohol exposure affects hypoglycemic seizures in impoverished diabetic patients.

Better yet, imagine if the researchers knew exactly what these patients ate, how much of it, and how often? Creepy to many of us, but this sort of thing would get a dietary epidemiologist more riled up than Guy Fieri at that one pizza place in that one city.

Thank you for finishing my graduate student-level explanation of SEM. I find it’s easy to sit in class listening to SEM lecture after SEM lecture and still not be able to explain what I was just told. Hopefully you can now decide whether it’s worth pursuing further.

Below are several superior and much more thorough explanations of SEM.

If you want the most accessible Structural Equation Modeling lectures, then check out Structural Equation Modelling (SEM): What it is and what it isn’t by Patrick Sturgis from the National Center for Research Methods. I supplemented my course work with this mini-series, and it was a great addition. Maybe the British accent is the right proper way to hear someone explain complex statistical methods.

A technical salesman explains how to use SEM in Stata, which I found was the most useful way to conduct SEM in my class. Unfortunately, Stata costs more than my travel grant award, so it might not be useful to those without institutional access.

Fortunately, there’s a free R package for SEM called lavaan, which has a ton of documentation for those dedicated few to peruse through.

Statistics Solutions has a 1-hour lecture on SEM, which might be great for a deep dive of SEM.